Previous posts have highlighted some of the benefits of the project.

The title of this post is a question from our evaluator David Kay that I somewhat failed to answer in my last post so here goes.

Scalability of OpenCalais use (some numbers)

We are using the Open Calais web service (http://www.opencalais.com/documentation/calais-web-service-api) on a free basis. OpenCalais allows for 50,000 transactions per day per user on this basis. Anyone using the OMP workflow prototype will be regarded as the same user. When running the analysis in the workflow each ISAD(G) element that is selected for analysis represents a single openCalais transaction.

There are currently 23 text boxes that can be selected for analysis. However during focus group meetings with the AIM25 archivists it was suggested that only a 2 or 3 or these would be likely to have potentially meaningful analysis.

In the last 9 or so years AIM25 has accrued records for 15,335 collections. So some back of envelope maths would tell us:

Even in the unlikely event that someone analysed all 23 text-areas, that would be just over 100 transactions per day. So there is some wriggle room in the 50,000 limit for edits, re-analysis, etc.

Of course the reality of how archivists use AIM25 is probably not very well represented by those numbers. The potential constraint placed on archivist throughput due to openCalais analysis (ie max records that could be analysed in a day) would be about 2,174. I'll let others who are more qualified to comment on whether there has ever been, or may be in the future, a throughput that exceeds that.

Robustness of processing against OpenCalais (some churn)

The analysis does take some time and as one would expect, the greater the number of elements being analysed and the length of the text blocks sent for analysis will increase the time taken. The prototype leaves the annotation and processing of the result RDF to the javascript element of the AJAX process. This means that there is reliance on the performance of the client machine which is an unknown.

A move to more server-side processing would also improve extensibility of the framework. Server-side brokerage of results from a range of services would allow for a more consistent response both for AIM25 workflow and for any potential third party clients.

Posted by Rory McNicholl at 04:09 No comments:

The OMP prototype ISAD(G) editor - How it works

This post describes the prototype workflow tool. How it can be used for recording AIM25 collection level records and some associated technical issues.

For the prototype we took a snapshot of the AIM25 database and put this on the OMP test server (http://data.aim25.ac.uk).

An alternative workflow for adding and editing collection level records was built using in PHP using this snapshot as a data source. The Javascript framework jQuery was also used to control on-screen actions and provide a bit of dynamism. The ISAD(g) elements are grouped into the areas as described by documents like this http://is.gd/GEXdG2 each area given a tab. 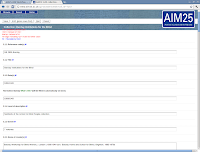 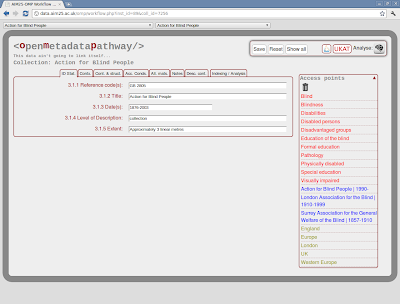 The access points are displayed on the right. Terms are colour coded according to the four term types:
Each term classified under these types are represented by the OMP data-browser which parses RDF that is in-turn derived from the existing database (more on that later). Archivists can remove access points by dragging and dropping terms in to the dustbin icon.

For rapid development this service runs boring old SQL on the existing AIM25 data tables, but as there is already a mechanism to transpose this data into RDF (and more) a more robust semantic solution is theoretically a short hop away.

Archivists can use check-boxes by the side of each textarea in the workflow form to select ISAD(G) elements for analysis. The selected text is sent for analysis by one or both of the services and results are displayed in two ways. 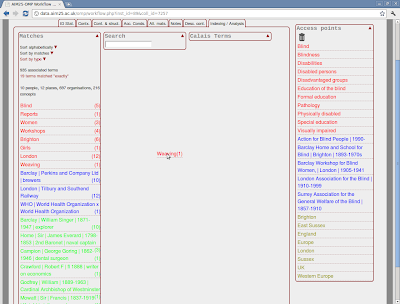 Above is an example of a list of terms returned from the AIM25 service . The term "Weaving" is in the process of being added as an access point for this record.

Here we see the same results embedded in the text. These are a smaller set as they only include the exact matches. When saved, terms not added to the access points are stripped out. Those that remain can be represented in context as RDFa.

Here the results returned by OpenCalais are embedded and below they are displayed as a list so that they can be added to the access points. Also below are the results of a direct lookup on the AIM25 service so that archivists can add access points for terms that do not appear in the text. 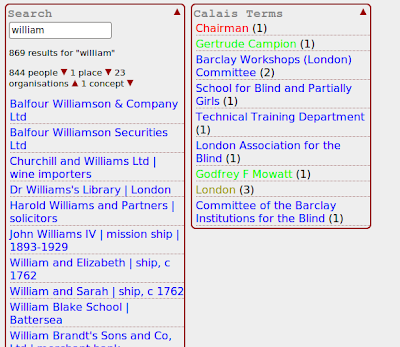 Did we achieve any of aim3? More to follow on this soon...

Posted by Rory McNicholl at 08:07 No comments: